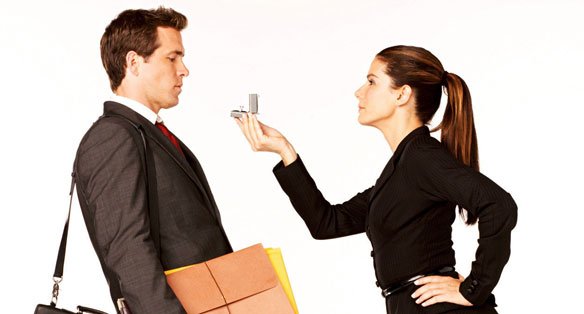 Would you mind if a woman asked you out on a date? Probably not! You might even think it’s sexy. But what about if a woman asked you to marry her? For some reason, society has had a tougher time opening up to the female-initiated marriage proposal. But for what reason?

Women have come a long way since the dark ages of being chained to a kitchen sink – but neither men nor women want a marriage proposal where she asks the guy to marry her, according to a recent study.

We live in a cosmopolitan world and we’re currently experiencing a break in tradition. More and more women are proposing to their husbands these days, and there’s absolutely nothing wrong with that. In one story, a woman took her husband up in an air balloon over California (to honour his favourite ride at Disneyland) and presented him with a luxury watch, instead of a ring, followed by champagne upon landing. Now what about that? How does it resonate with you?

However, it differs in the Arab and Asian world. If you think that the probability of a ‘NO‘ is very likely, then it’s usually a NO in most cases. No one likes rejection.

Since I was a little girl watching Cinderella and dreaming of a same happily ever after ending with MY prince charming; we’re told that a woman cannot ask or bring up marriage, she has to wait for the man’s proposal. We’re also told that if he really loved you, he’d propose right away, before a proposal ever occurred to you. Women are told both, that the proposal means everything and that we have no control over whether or not it happens. No wonder we feel like we’re going crazy.

Each country has its own culture and tradition. Looking back through ancient Irish history, Leap Year – means women can ask men to marry them. The tradition began in 5th century in Ireland when St. Brigid of Kildare bitterly complained to St. Patrick that women had to wait far too long for men to propose. The legend says that St. Patrick decreed that women could propose on this one day in February during the leap year. I’m sure the women were thrilled. The tradition was then taken to Scotland by Irish monks.

In the USA and Europe there will be more girls proposing to boys as compared to India while, in Saudi and Middle East there would be hardly any girls proposing. When a child is born he/she is trained to fit into society through societal rules and regulations and if a girl proposes to a boy, she would be breaking the social barrier.

In my part of the world being half Arab myself, people judge way too easily. Even if someone says that he/she doesn’t care about what opinions others have about them, it does matter. So, in a case where rejection happens, a girl is usually afraid of what others might think of her (this time she is more concerned about society rather that the man’s opinion). Or what if the news spreads, especially if they have common friends; will she become the laughing stock?

I have heard so many “horror” stories about friends of friends, who gave their blokes diva-ish ultimatums to marry them, or else, that I never wanted to be like that. Who would want to marry their other half knowing they have forced them into it?

What if you were arguing in years to come and he threw it back in your face: “well, I never wanted to marry you then, you made me do it“. Or what if you caught him eyeing up other girls in a club (yes, all men do this, even the committed ones). Could you honestly feel that he’s 100% committed to you, or would you feel like you’ve trapped him into marrying you? Hand on heart, I wouldn’t be so sure.

I googled “women proposing” and talked to my friends and colleagues at work. There was one clear message: “Cute idea, but you should really wait for him.” One of my closest female friends told me “Men will propose when they are ready. We just have to wait for them.” A close male friend just couldn’t envision how a woman proposing would work. The internet told me that he’d feel like I was stealing his thunder. It also warned me that he might say yes without meaning it, just to keep the peace. Some articles warned me that it would ruin the relationship forever.

When you seriously contemplate standing in front of someone else, and asking them “Will you marry me?” — well, it’s terrifying. You’re incredibly vulnerable. You’re really asking them “When it comes right down to it, is this relationship everything you want it to be? Can you do this for the rest of your life?” It made me realise that a man might delay proposing even when he’s sure he wants to get married, just because actually spitting out the question is terrifying!

When you’re a woman proposing to a man, you get to add to those questions, “Can you handle the fact that I’m asking? Do you have unspoken expectations about gender roles in our relationship that I’m breaking? “What if, somehow, I’ve got it all wrong? What if he is not the right one for me and someone else in this world is waiting for me? What if somehow he’s really not happy with me? What if I ask him, and he realises he just can’t do this anymore? What if he says NO?”

Proposing to a man means changing a deeply ingrained cultural narrative; it can be intimidating and scary. There will be pushback, both from other people and from your own assumptions. But it also gives you space to think about who we really are, and what getting engaged and married really means for us. Telling a new story means you get to examine those assumptions and decide which ones work for you.

Remember: There is no ‘right’ path to getting engaged, just as there’s no ‘right’ way to getting married. It really is okay to write your own story, no matter how similar or different it is to the existing cultural narrative. I can’t say it’s easy. But it’s worth it.

The point is; there’s no reason to feel that your relationship should fit into anyone else’s framework. If you want to propose, go ahead. If your girlfriend wants to propose; great. I mean, hey, it’s a hell of a lot of pressure off you if she ends up doing it, right? It simply doesn’t matter who does the asking. All that matters is that two people want to make a commitment to each other and that’s pretty cool.